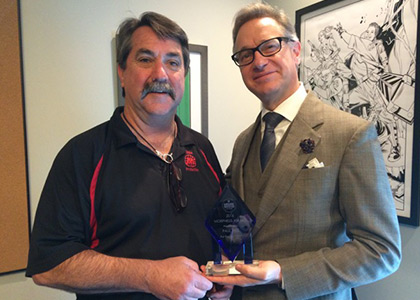 At Moore Protection, we love the movies! As an LA based company, we are lucky to be surrounded by a great industry that celebrates such excellent stories. We love being drawn in by the drama and laughing at all of the hilarious comedies. Being located in an area where films are so central, we know that Awards Season is the most important season in Los Angeles. This is why we have created an award of our own. We give this annual nod to the film that we feel did an excellent job of accurately portraying what security should look like.

While the Morpheus Award recognizes and rewards the realistic use of security technology in film, we also use it as a fun way to remind our show business clients and their neighbors to arm their security systems. Especially if they are heading to an awards banquet!

Take a look at some of our previous winners.

Long Shot - In a slight departure from our historical choices where the Morpheus Award focused on movies that prominently feature alarm systems, surveillance cameras and other similar security hardware, this year we are acknowledging the fastest-growing segment within the entire security industry, cybersecurity. The winner of the 2019 Morpheus Award is Long Shot starring Charlize Theron and Seth Rogen. It is certainly not a “spoiler” to tell you that cybersecurity, or, more precisely, the lack thereof, is a major plot point in this extremely enjoyable romantic comedy set amid the world of modern international politics. We are pleased to add Long Shot to our long line of Morpheus Award winners but please remember the main intent of this fun little award is to remind our clients to always pay attention to those things that keep you safe, and especially in this day and age, your cybersecurity!

Logan Lucky - Directed by Steven Soderbergh, Logan Lucky is a heist comedy that follows the Logan family as they plan to rob the Charlotte Motor Speedway. While everyone is distracted by the big race, the Logans play out an elaborate scheme involving mining tunnels, law enforcement double crosses, surveillance and classic misdirection to rob the Speedway vault.

The Accountant - Christian Wolff (Ben Affleck) works as an underground freelance accountant for elite criminals, drug cartels, and enemy governments. To survive in that world, he has honed the fighting skills and firearms training taught to him by his military father. Throughout the film, but especially in the climactic scene, Christian's movements are tracked via surveillance cameras being used by his latest “client” who now wants to see him dead.

Spy - Written, directed, and produced by Paul Feig, Spy is a comedy, action, and spy film all in one. Starring big names like Melissa McCarthy, Jason Statham, Rose Byrne, and Jude Law, Spy won over critics and audiences across the globe. Instead of using outlandish gadgets like other genre movies, the CIA-employed characters in Spy use realistic technology, which adds to the believability of the film.

Gone Girl - This film is about the disappearance of Amy Dunne (played by Rosamund Pike) and her husband Nick (played by Ben Affleck) who is suspected of murdering her. At one point of the film, you see the house of one of Amy’s ex-boyfriends (played by Neil Patrick Harris). His house has an intensive CCTV security camera system used to protect his home.

RoboCop - In this remake film, Joel Kinnaman plays a Detroit cop that is critically injured in a car bomb attack. Scientists then turn him into a half-man/half-machine cop, referred to as RoboCop. During this process, they take away his emotions and memories of his family. RoboCop then views CCTV footage that helps him to recall his memories.

Nightcrawler - In this film, Jake Gyllenhaal plays unethical crime reporter Lou Bloom. His goal is to take footage of crimes in affluent areas of Los Angeles. His “pièce de résistance” is his film of a crime scene of a triple homicide in a large Beverly Hills estate. The Beverly Hills estate has a full security system that immediately notifies the police of the crime.

In The Purge, Ethan Hawke portrays a home security professional. His business uses security technology to attempt to keep families safe in this dystopian world, where there is one “free-for-all” night where any crime can be committed without punishment.

Argo depicted Ben Affleck saving U.S. diplomats after the U.S. embassy was attacked during the Iranian Revolution in 1979. While the film does not show “modern” security systems, it does show the most state-of-the-art system of the day in the U.S. embassy. The embassy contained safes, paper shredders, incinerators, security cameras, and security staff.

Tower Heist starred Ben Stiller, Eddie Murphy, and Alan Alda as a team of blue-collar employees attempting to reclaim money that had been stolen from them by an unethical Wall Street mogul. In order to do this, they needed to circumvent a comprehensive modern surveillance system. The film portrays them completing this in a fairly believable way, although it was still not perfectly accurate.

Unstoppable showed Chris Pine being able to use a closed circuit security camera to track and eventually help stop a runaway train.